I was recently invited to a screening of a new film called Under African Skies......a documentary celebrating the 25th anniversary of Paul Simon's Graceland album and tour.  The film focuses on the origin of the music and the political controversy that surrounded it.   It is a wonderful film and I highly recommend it.  The film was produced by my friend Jon Kamen of @radical media and was directed by Joe Berlinger.  There are great interviews with Paul and the musicians, Harry Belafonte, Hugh Masekela, Quincy Jones, David Byrne, Peter Gabriel and others. It is packaged with the 25th Anniversary release of the Graceland CD and is available from Amazon at the amazing low price of $14.19!   It is not available yet on Netflix. 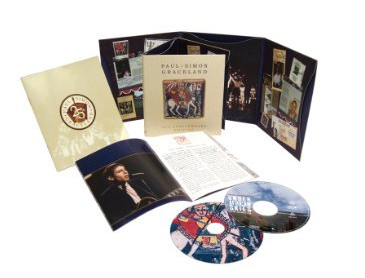 I was intimately involved with Graceland from the very beginning.   I was at Paul's apartment around 1985 doing some work on his guitars and he asked me to listen to a cassette he had on a Walkman.  This cassette was the original "Gumboots" tape of South African Music. Paul was just beginning to write melodies and lyrics to those tracks which eventually evolved into Graceland.   When Paul brought the musicians to New York to record the album, I had the honor of supplying guitars to Ray Phiri and John Selolwane.  Ray eventually purchased at least 5 guitars from me.  Paul had three.  During the Graceland tour, I had 6-7 guitars on stage during every performance.


I saw Paul after the screening of Under African Skies and told him how much I would like to see Ray and John again.  He was kind to invite me to the rehearsals.  He is doing a short European tour with the Graceland band.   We can only hope he will do something here in the States later this year.

I will always consider it an honor and a career highlight to have been involved with Graceland.

Posted by Roger Sadowsky at 5:32 PM